Do you remember the Kazariyama from the Kawabata Arcade? 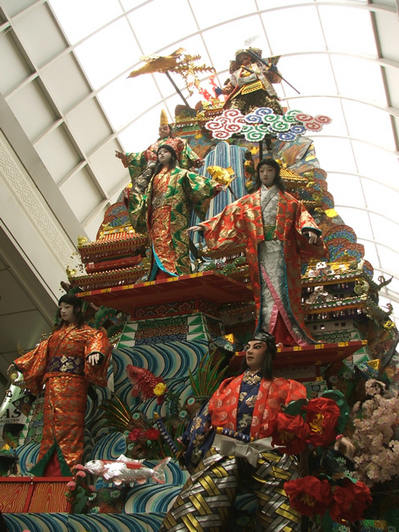 That is one classy Kazariyama…

Have you ever wondered what exactly they make these things out of though? I asked around and a lot of people seemed to bring up Hakata Dolls, so I thought I’d cover a little bit about them.

What are Hakata Dolls?
As the name suggests, Hakata dolls originated here in Hakata many hundreds of years ago. They’re little clay pottery dolls, richly coloured and decorated and with an unglazed finish. This makes them a “Bisque” doll. Most of them are fully clay, though they will have embellishments out of other materials.

Their history is said to date back to a roof-tile maker that made some dolls to a local Temple in thanks for services rendered, and that’s the legend the locals go by. Until becoming an item of high art in the 19th century they were just playthings. Unlike glazed and porcelain based craft dolls of Europe they have a lower firing temperature and aren’t fired (baked) after the paint has been applied, so what you see is what you get.

Since the post-war occupation they’ve been popular souvenirs to take back to the US and overseas. They’re also popular domestically, though growing popularity also means more and more are getting produced in factories with lesser quality to them than the original hand-crafted variety. You can read more about it [here] and [here].

So are those floats all made of clay…?

That would be really, really, REALLY heavy, so no. The Kazariyama and Kakiyama both are made of wood and other materials. Some of the photos I have that I’ve taken a closer look at a bit like a paper mache finish; others have fine traditional cloth properly stitched to make clothes. 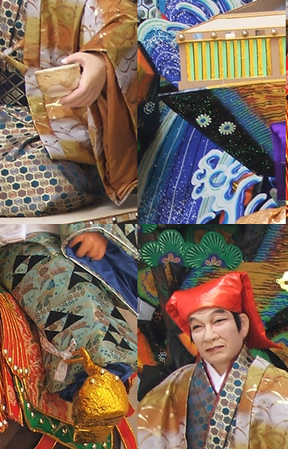 See that detail? Cloth and foil and paper mache and beads and things…
They might be a bit garish, but they are impressive, both in size and detail.

Who Makes Them & How?

The dolls are apparently designed by a “Dollmaker”. His job is to come up with the designs and supervise the production of each doll. He is also on site when the Kazariyama gets put together to make sure his design comes to life properly.

He doesn’t do it alone though; as a dollmaker he has a factory, and delegates lesser tasks to lesser people.

The production takes all year… which is something.

Who chooses the design?

Well, each Nagare (these are the 7 regions in old Hakata City, that participate as a team each in the Yamakasa festival) negotiates designs with their chosen dollmaker. Though it’s his job to produce the piece, my boss tells me the town’s input is taken on board, and each Kakiyama & Kazariyama is 80% town decision and 20% dollmaker.

There are not that many dollmakers left in Hakata, and as those that produce Kazariyama get older the craft is tapering away. These sorts of decorations used to have other uses, but nowadays Kazariyama will be a craftsman’s sole job.

As dollmakers will make more than the one Kakiyama/Kazariyama and work with more than one Nagare, they are well positioned to drop hints about the other teams’ decisions and ensure no doubling up happens.

What happens to the dolls during the festival?

They’re on display! For the 2 weeks of Hakata’s Yamakasa season, the giant and glorious Kazariyama will be out for all to see, while the smaller Kakiyama will appear a little later and be carried throughout the streets of Hakata on the final morning of Oiyama.

In the old days, the festival teams would call dibs on parts of the Kakiyama and kazariyama that they wanted to take home. Why take a giant, gilded bit of decoration home with you? Well, this is not just ANY bit of giant gilded decoration. It’s been used to carry the Gods of Kushida Shrine all around Hakata City!

Taking parts of the Yamakasa decorations home after the festival is seen as lucky, and keeps your family safe from illness and injury for one year. Of course if you’re gonna take something, it’d be much more satisfying to have a doll or a head than a bit of tinsel from a bridge or something.

So people called dibs and took bits home, after the Kazariyama & Kakiyama were disassembled after the morning run that ended festivities.

as the popularity and fame of the festival spreads across Japan, some Kazariyama are actually booked out to be on display throughout tourist spots in Fukuoka for the rest of the year. Some places you will see them after festivities include Fukuoka Airport, as well as anthropological museums far and wide across the country. Hakata locals are ambivalent towards this new trend; on one hand their tradition is being honoured and celebrated by people all over Japan & abroad, but on the other their special, local festival is being pimped out to strangers.

Kushida Shrine and Kawabata Arcade are special in that they’ll display a Kazariyama all year round for people to see. If you’ve missed the festivities but want to check out these amazing, 3 to 4 storey tall decorated mountains, drop by either of those locations (each 10-15 min walk from Hakata, and within 5 minutes of each other).

It’s sad, but participants can’t take bits home anymore, so regular spectators are out of the question.

How Long can you Keep a Good Luck Charm?

Good question! You’d think with nearly 20 Kazariyama in display around Fukuoka every year, being made brand new every year, the place would be overflowing with bits of doll mountains by now!

Thing is, in Japan things that are considered supernaturally lucky or blessed as a rule should only be kept for one year. After that the luck wears off and worse, brings bad fortune to you and your family instead. This applies to O-Mamori charms and paper fortunes that you buy at temples as well! Don’t forget to take them back!~

So what do you do with charms past their use-by date?

Fortunately, pretty much every major Shrine in Japan that sells these things will also have a “charms disposal” window to which you can take your old omamori, dolls, fortunes, lucky rope bits, blessed paper bits… anything you can think of.

They dispose of these things in the proper way, dispelling any bad luck that might be associated, leaving you free to purchase the next year’s fortune and omamori. Smart system, huh?

After a year of display, being superceded by the next display Kazariyama as the Yamakasa finishes, old Kazariyama will be disposed with the help of Shinto officials. As a rule, they don’t get kept around longer than that.

The thing about dolls is…

In Japan, there’s a special belief revolving around dolls and things that have a human shape, human features and that… the families that I know take very good care of their Hina Matsuri doll sets (those huge ones that cost $500+, that every girl must have?), because amongst other reasons you don’t want a bunch of spookily real and detailed dolls bearing a grudge against you. It might sound silly, but you’ve never had to sleep in a room with just you and a doll set, alone in the dark…..

There’s a company in the US that handcrafts dolls to match the features & eyecolor of your child, with real hair cuttings from said child to finish the effect. It’s meant to be a special memento type thing that families keep along with the baby’s first toy and slippers, but… to certain superstitious Japanese friends this is TERRIFYING.

A doll? Made to look like you? Using your HAIR? That’s just asking for supernatural trouble. And what happens when it’s time to grow up and you go and throw out all those dolls you used to care so much for? what if they come and get their revenge…?

Basically, the Shrine’s “Charms Disposals” unit will come to your rescue. They’ll bless and burn and “bury” old dolls properly so that there’s no chance of this human-shaped thing, with which you formed such a strong attachment, getting revenge for the sudden abandonment.

So this is the life cycle of a Kazariyama and Kakiyama. After being displayed and raced around and treated with the utmost care, they get disassembled and after further display, disposed of in a fashion appropriate to holy items.

As for souvenirs of the event, try Hakata Dolls instead. Light, detailed and gorgeously crafted, they’re for sale at all those little market streets near popular Shrines that are overflowing with traditional Japanese goods. Try Kawabata Arcade near Kushida Shrine. The larger, more intricate and hand-painted ones will set you back a fair bit, but as most things these days there are cheaper factory produced alternatives on the market too.