Waking at 2 am, I begin my bike ride to work…


It was a full moon lit night, the streets eerily empty and yet strangely not when I left home in Yakuin to bike through Tenjin, then to my office in Gokusho. There were taiko drums and army-like shouts in the air, coming from the vague direction of Reisen Park and the Kushida Shrine…

After having my combini breakfast & energy drink and parking my bike out of the way of Yamakasa runners, I jogged down to Kushida shrine to find a place. I got there at about 3 am, expecting it to be more packed than it was…. don’t get me wrong, it’s a huge turn-out for 3 o’clock in the morning. The spots around the start line and beyond it (where you can see into the shrine a little bit) were 3 or 4 people thick already, though you could walk past. Most of the cordoned off portion had a row of people that were sitting, and a row standing behind that. You could still find a decent place. Anyway… my camera really struggled with the dark, on account of me not accounting for the blurriness and changing my settings properly. But for narration’s sake, it’s enough.


Down at Reisen & Kushida Shrine before the Oiyama Starts… 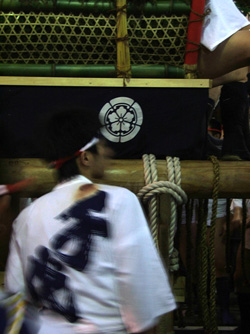 I found one. Do you remember my boss saying this was “uncool”? Now imagine running with the poles of a 1-ton Kakiyama on your shoulder, over the top of burst blood blisters? OUCH. This is such a macho event…


This is more than halfway through the course. Each Nagare has one of these giant wooden huts (called a wooden hut, or yamagoya…) under which the Kakiyama lives. All Yamakasa related events tend to be located around the wooden hut for that Nagare. The right to have the hut on their turf gets passed around year to year like the right to run first in the Oiyama; this time between each sub-town within each Nagare.


I dropped by here after seeing one Kakiyama pass the Nishi hut… as it’s further than 1/2 way through the course, I didn’t want to waste the chance to see Taihaku Doori all closed up and full of people traffic again. Lucky for me, Kakiyama have a long way to run!


I was pretty happy with myself by this point. I thought I would be able to get to 1 or 2 spots max, that it would be crazy crowded and I wouldn’t be able to see anything. In fact, it DID get pretty crowded at certain points in the course at certain times; places like the goal point (past the line) and Kushida you had to fight for from 2 or 3 in the morning. But other places were cruisy, you could get a good look without stepping on too many toes.

The crowd was also pretty fluid after each Kakiyama had passed, except for Kushida and the Goal Point of course. Parts along Taihaku were full up as well apparently, but not as bad as on the Tenjin run where every imaginable seat/object to stand on seemed to be taken, except for the tall stuff that police told you to get off coz it’s “dangerous”. PSH


After the Goal~ heading to home base


Though I didn’t get a nice photo or a clear look at them finishing, Higashi came in 6th and it was my specific assignment to follow them home and watch them unpack the Kakiyama. So I ran ahead of them, though it turns out the trip back to home base isn’t nearly as fast as the trip around the course (go figure). The Kakiyama now had to stop at major traffic intersections and just before it got to its home on the side of Taihaku Dori, traffic and buses were already back in action along that stretch of road.


It was kind of scary how fast business was back to normal aftwerwards… but here we go.


You thought that was all? Higashi is famous for one last thing that it does before the Kakiyama’s base gets taken apart, and everything is trucked off to mysterious places…

the Kakiyama is a swing!


I bet they were waiting alllll festival just to do that… heheheheh.


So Higashi’s clean up is pretty fastidious… is it required? Heck no! Just look at Nish’s cleanup:

There’s some serious anger issues here… this would have felt pretty good too.

So that’s that! My experience of the Oiyama. I saw a lot more than I thought I would, but on the downside of that I didn’t get to see all 7 teams pass any one place. It wasn’t nearly as impossible to view as anticipated, although the best footage of the day was as always on the TV, seeing as they got to hog stacks of prime viewing real estate.


One point that did bug me was that cops would chase people off the traffic islands on intersections that were closed off for the yamakasa. You couldn’t stand on the road, OR on the islands, which are reinforced against car accidents in any case, should some stray vehicle somehow get past. WHAT GIVES, guys? And I don’t appreciate being told things are dangerous. I have traveller’s insurance, I paid for it specifically so I could do irresponsible things on top of concrete pylons. If I fall off, it’s not like I’m going to sue the roads people or the police department.