Although there are no official festival events between the opening of the Kazariyama on the 1st and the first runs on the 9th and 10th of July, in fact quite a few things seem to be happening through the festival period if you know where to look for them. For example!

Can you believe the kids do it too…?

Over Friday, Saturday & Sunday last weekend several different primary schools ran Kids Yamakasa events throughout Hakata and its surrounds. My own first real life Yamakasa was the one that Hakata Primary School put on through the turf of Ebisu, East & West Streams. My manager at work had a busy weekend biking to separate, simultaneous Kids Yamakasa events that included Chiyo Nagare and Tenjin, of all places!

The Kids Yamakasa is more of a family day out, like a house athletics day (if your school had houses like mine did… nowhere near as cool as Harry Potter though) or school swim meet. Parents were gathered around to watch and cheer on their kids; dads were in the thick of it helping out. Since we’re talking about Hakata Primary here though, it’s a given that all these kids are born on ancient Hakata turf and that many of their dads will be runners in the real Yamakasa. So appropriately there was a sense of pride and culture being passed on and partaken in that went with the whole mums standing around taking photos. A bunch of dads were dressed in full Water Happi gear as it would be their job to carry the Kakiyama across roads with heavy traffic and help the kids out as they go along. 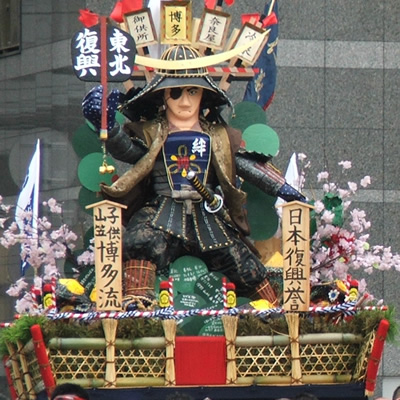 Size & Design:The Kakiyama is a serious piece of equipment at 2/3 the size of the adult Kakiyama. It uses the same materials, full heavy wood and bamboo and decorations. The kids Kakiyama sport images of more child-oriented themes like characters from anime or manga, etc. I’m not sure who this guy was though, as I am mostly illiterate in Japanese.
Course: The course is not a full 5km, but closer to 1 or 2. This particular one wound around to start and end at the school, and crossed the major thoroughfare of Taihaku Doori twice.
Participants: Girls can also participate in this event, though from what I saw only up until 3rd or 4th grade. Instead of the headband/hand towels denoting rank, they now separate the school grades.
Water Buckets: Just like the real event, female classmates (and mums and relo’s) were carrying buckets with which to soak the participants with, as it’s a hot and tiring job running with that giant Kakiyama on your back. They also cheer and run alongside too.

And so, on to the pretty pictures! Appropriately my boss warned me against putting photos of the younger girl participants up, as the internet is well-known for having weirdos lurking in its dark recesses. For the boys? “Weeallll they’ll be alright. You can’t avoid a bit of butt in the Yamakasa.” lol

Meanwhile, gathered at the lights…

Those red-kerchief boys look pretty strained. At this point they’ve run just 1/3 or 1/4 of the course….. the kids are let across, then the adults wait for the lights again and carry the Kakiyama across themselves. This is listed on the program to happen at major intersections… not bad for not disturbing a day’s traffic! But they had to stop people turning into the streets occupied by runners.

All in all, an exciting day that got me pretty psyched for the real thing. This, of course, was not the only Kids’ Yamakasa on over the weekend.

Both Chiyo and Tenjin are special cases in the history of Hakata’s Yamakasa festival. To start with, although Chiyo is officially part of proceedings it is located across the river from the rest of Hakata.

Chiyo is the yellow one, above & across the Mikasa River.

Geographically that means that the Oiyama Run could never pass through there, and that most other matsuri activities just don’t involve them. Something else I’ve heard recently, too: Chiyo Stream, though on the map as a part of Hakata from time immemorial, only got to join the Hakata Yamakasa Festival after WWII. Geography is probably behind this too. The only reason they were let in is because, of course, they have the heritage for it.

But as a result of being the odd ones out, Chiyo take their Yamakasa activities very seriously. They are keen to prove they are just as worthy of the event as their cross-river brethren. So even the kids event held in Chiyo is a serious affair. The kids rarely stop their running; even after the event finished the atmosphere wasn’t really “YAY! Let’s have fun!”. Instead the old hands of the Hakata Oiyama gathered the older kids around (the ones that were just about old enough to enter the real run sometime soon) and told them about the best ways to carry the Kakiyama, how to loop their rope around the poles and what angles to hold it at, etc. It sounds more serious and much more respectful.

It begs the question: Can new townships join the Oiyama Run and Hakata Yamakasa Festival?

The answer seems to be a resounding no; even townships right next door to where each of the Streams end aren’t allowed in. Although there’s a strong history of non-runner volunteers being recruited for certain Streams from certain areas of what is now known as Hakata Ward.

On the other hand you have Tenjin.

Firstly, Tenjin is not part of Hakata. You might as well call them two different cities, as they pretty much were for most of history. Tenjin & the Fukuoka Central area (did it weird you out at first how “central Fukuoka” was nowhere near the major transport hub?) was the samurai castle town, Hakata the rich merchant town that preceeded it by centuries. When Hakata lost its name to become Fukuoka (also losing the right to have either the prefecture OR area called Hakata), the locals were pretty peeved.

I’m not saying that people are all still carrying a torch for their lost heritage or anything, but people understand them as two different places. So if Tenjin is not a part of Hakata, and if even parts of Hakata as old as old Hakata town can’t join festivities, why then does Tenjin get to host a Kazariyama, run a kids’ Yamakasa and even have a Yamakasa race run all the way to their turf?

So when Tenjin runs their kids event, which they’ve been doing for a respectable 20 years now, it all felt a little different.

My manager let me use some of his photos from the event. Psych! I didn’t go as it was Saturday, and a close friend was leaving town. But if you were shopping on a saturday afternoon in Tenjin’s mall district, this may have surprised you on your journey:

All in all, my manager said it seemed like a much more relaxed, touristy type occasion than what the Hakata or Chiyo kids were up to. Lastly there are some photos from another run the Hakata kids did, this one on Sunday, that included a visit to the Kushida Jinja and a timed lap around the loop bit that the proper Oiyama will loop around before leaving to crisscross the city.

Check out the sports coach to the left…

This guy means business. This would have been partway on a 2-3km course, two days after the first run of 1-2 kilos in the first series of photos. 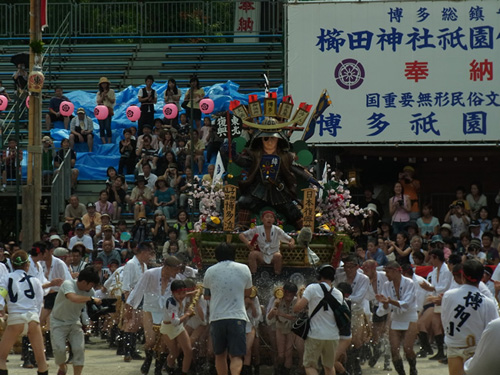 Doing the timed lap around the loop. The time is then announced on loudspeakers.

If I recall correctly, a few different teams do the loop and the times are compared. It’s quite a run, you can see how intensely everyone is into it. And then you have Tenjin… with seatbelts……..

Anyway, enough of a taster for next week’s events! Also over the weekend the Kakiyamas have been assembled and revealed at each Stream’s head camps. Some aren’t quite finished yet but most will be on display, flat on the ground without the carrying logs underneath them. The carrying logs are parked under the Kazariyama… because the Kakiyama wouldn’t fit indoors if it had its legs on. Simple and practical reason!

Take a look here for a page that lists each Kazariyama around town, with photo, and a phrase to describe the theme / famous person depicted. This gets updated as the Kazariyama are revealed.

If you want to go and explore some of these Kazariyama and Kakiyama for yourself, this page has a list of each location. Grab a map of Fukuoka and mark them down, or take a look around your nearest tourist centre / Kazariyama for a booklet or brochure on the Yamakasa as there are quite a few free ones floating around. They’ll have all the spots marked out. You could see quite a few of the Kazariyama in a day’s walk, all if you plan your route and grab a subway ticket.

Also if you’re in a shopping mood, check out the Kawabata Arcade or the shops around Hakata Riverain for not only some nice Yamakasa-themed omiyage to take home, but for the chance of meeting dudes in their full Long Happi festival get-up.

For festival-themed goods, shop near the folk museum at the Kushida Shrine also stocked the Yamakasa posters, the ones with each Long Happi / Water Happi design on them. Yamakasa is a bit strapped for souvenir ideas, but I think that one would make a nice memento.

That’s it for the week I think! As there’s no festival events to run to and the weather is bad, I’ll set myself to translating that booklet and getting the comprehensive schedule out there in English.

As for further festivities… stay tuned!