Everything from traveling info over maps to answering your questions 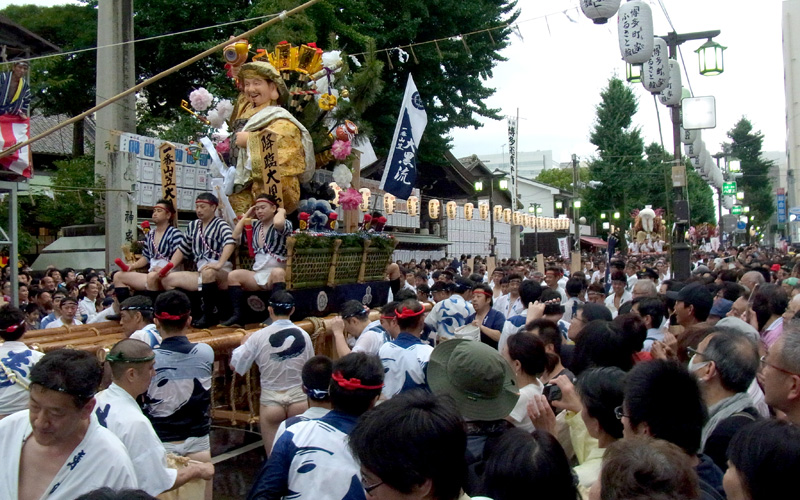 To deal with the problems that arise when about one million people want to watch one festival, certain viewing manners should be followed.
If someone in the crowd has bad manners, this can make the experience worse for everyone. So in order for you to enjoy the festivities as much as the people around you, we would like to tell you about some general Dos and Don’ts when in the crowd.

One Kakiyama can weigh over a ton and around one thousand carriers and others run along the path, wet from the “vitality water”. This is not one of the safest conditions for a festival, which is why there are officials there to keep things safe.
Traffic officers (identifiable by their green and white sash) and their assistants (yellow and white sash) make sure the runners have enough space and intervene where an accident could happen. We ask therefore to always follow the instructions of the officers for the crowds and your own safety.

Be careful at the viewpoints

The runners are not always on wide, spacious roads but also often run along narrow alleys, where the bulky Kakiyama and the around one thousand runners have trouble fitting. Here especially the danger of an accident is very high.
So please try not to stand in the way of the runners and try to obey the traffic officials and their assistants. Climbing on top of guard rails or power boxes is very dangerous and we would strongly advise not doing so.

Occupying an area as yours is not possible

Every year some people try to mark a space along the course as occupied by them. However all the roads and sidewalks surrounding the course are public property and the police often have to ensure the proper use of the public space. It would not be advisable to try and take up more than your reasonal personal space. Please just use your common sense as to how much space you need.

If sunny weather or rain, rain gear is essential

In Fukuoka at this time rain can come very unexpectedly so having rain gear with you is advisable. In the crowd using an umbrella can lead to problems because you could accidentally hit someone with your umbrella and you are taking from the view of the people behind you.
Also because the “vitality water” can come from an unexpected direction, raincoats are better than an umbrella.

Especially on the days of the Oiyamanarashi (12th), the Shudanyamamise (13th) and the Oiyama (15th of July) there will be more traffic inspectors around Fukuoka, making sure that no one drives into the closed areas or parks somewhere illegally. Even though you might be tempted to do so due to the lack of free parking spaces, we advise against parking in a closed area and ask to pay special attention to the traffic officers.

It would be a better idea to park the car further away and use the public transportation system the rest of the way.
Also, some parking spots only allow for a limited parking duration. Please keep this in mind when parking.
The Fukuoka police department announces a traffic map for the festival at the end of June every year.

Things to consider when using a bicycle

During the time of the festival also bicycle drivers have to pay attention.
The benefits of a bicycles manoeuverability and superior speed to bus and car, due to the traffic in Fukuoka, might make you want to rent a bike for the duration of your stay in Fukuoka. If so, please still be aware of the people on foot, that you are sharing the sidewalk with. If you drive too fast or not careful enough, it could come to an accident and traffic officers stationed at central locations in Fukuoka will tell you to be more careful.
There is also the question of bicycle parking spaces. In cities in Japan bicycles need to be left at special parking spots or you will get a warning and later a fine. The parking spaces are fairly abundant in Fukuoka and every convenience store allows you to park in front of it.
However please be sure not to park so, that it is an obstacle for anyone ore even get in the way of the runners.

During the Oiyamanarashi, the Shudanyamammise and the Oiyama on the 12th, 13th and 15th of July a lot of spectators come to Fukuoka.
Especially at the Kushida-shrine, the Temples and shrines along the course and along the Meiji-dori the crowd can get particularly dense sometimes even hindering movement.
In such a crowd a child in a baby stroller is at a higher risk, so it would be better to keep the child in your arms or on your shoulders, if old enough, and folding up the stroller.