Everything about the Yamakasa and their districts

The organisations "Hakata ELementary School", Chiyo Elementary School, Tenjins Shoppingdistrict "Shinten-chō" and the Radiostation "RKB" organise a yearly Childrens Yamakasa, where elementary school children can carry small Yamakasa along a shorter path.
In the last few years the number of the festivals participants has steadyly been going down. As a part of a Campaign to get more people to join the festival the schools and other oranisations set up a childrens Yamakasa to make the children and their parents interested in the festival. 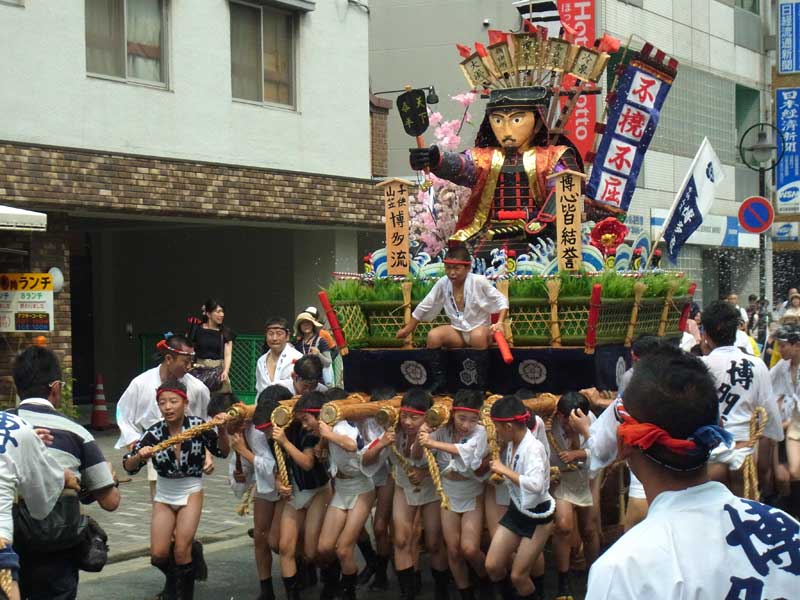 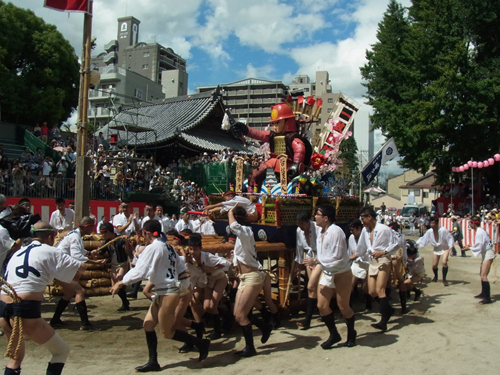 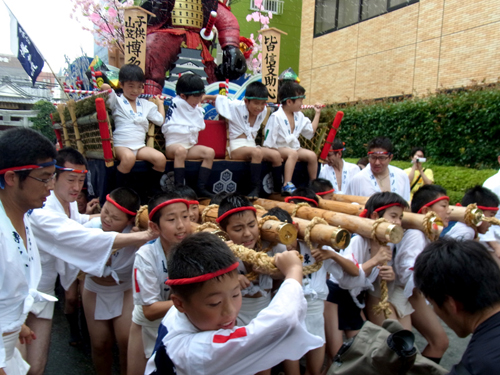 The Hakata Elementary School lets their students make their own Yamakasa as an extra curricular activity and race them against each other on the schools boundaries. The children even make their own dolls with the help of Hakatas dollmaker Takuma Okiayu.
The school has about 400 students and the roles of the Yamakasa production are split between the grades. The 6th graders design the front of the Yamakasa while the 5th graders design the back. The 4th graders help where they can and the 3th graders and below konstruct the frames. Girls of the school make small souvenirs such as the towels, that are spun around the head, or talismans and prepare the school feast.
The frames are actually made just like the Kakiyama and also only use rope to bind the carrying poles to the frame. 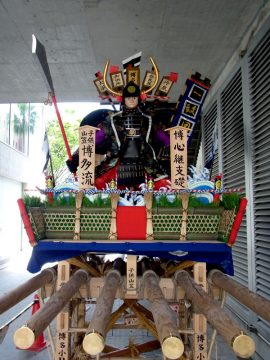 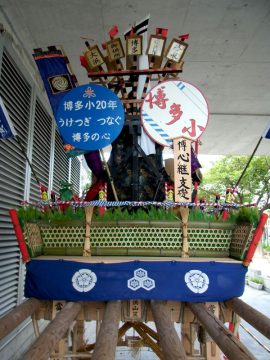 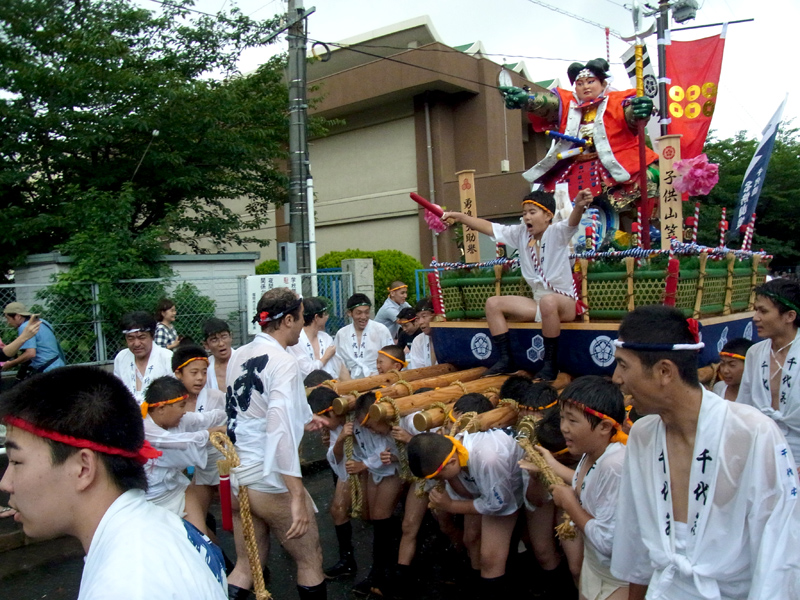 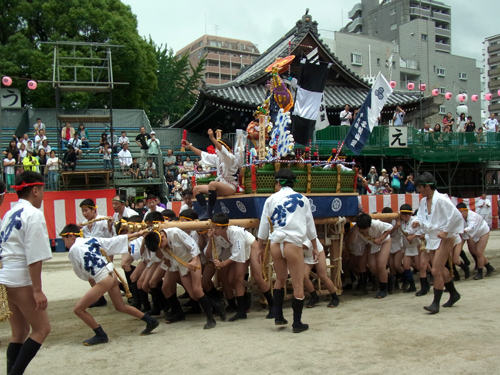 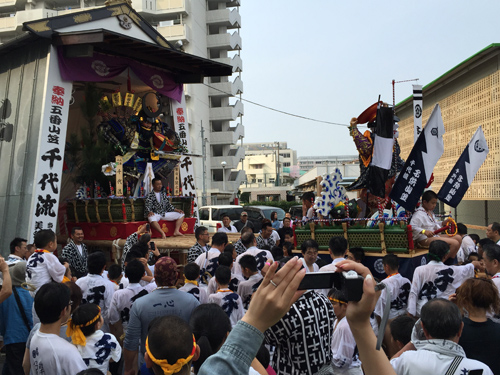 The Chiyo Elementary childrens Yamakasa was brought into life 1987 as part of the schools 100th anniversary. This event also allwos children from outside of the district to join and has greatly contributed to the large number of adult participants joining from Chiyo-nagare every year.
The children also perform the tightening of the knots around the carrying poles themselves, do testruns, sing the Hakata Iwaimedeta when the Yamakasa are done and partake in the Nagaregaki. Since 2012 the Yamakasa from this school have even done their own presentation ceremony at the Kushida-shrine after the Kakiyama left. 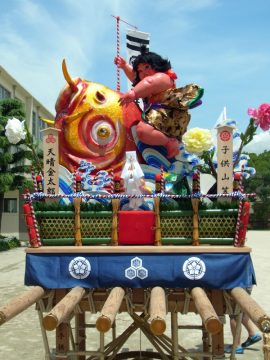 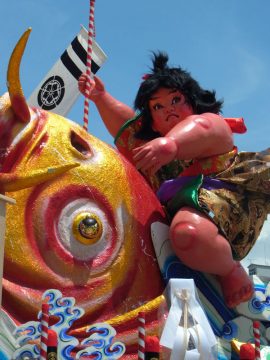 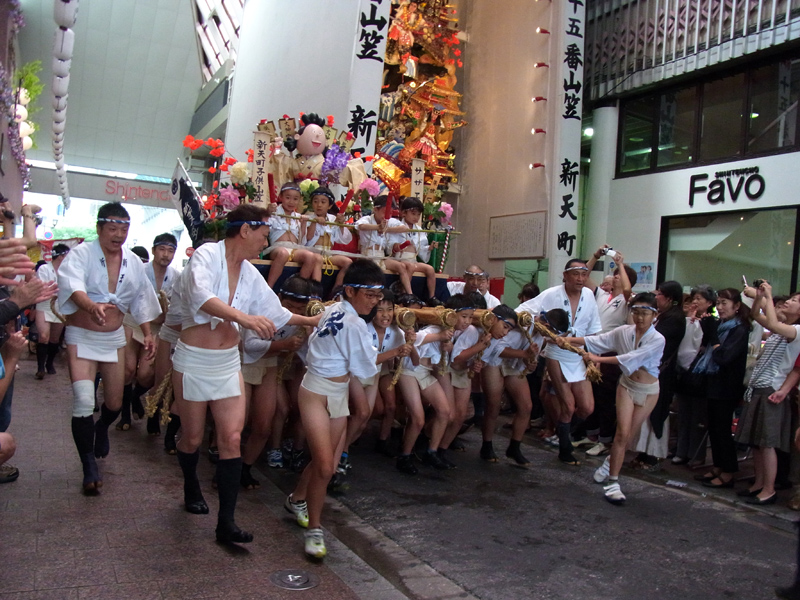 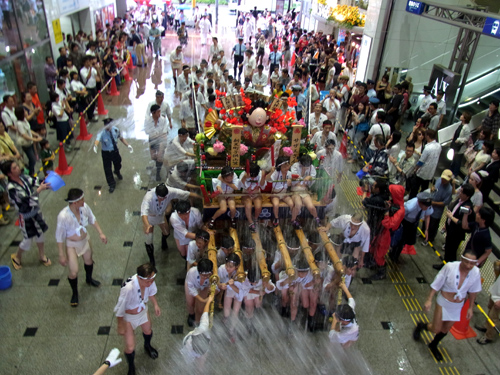 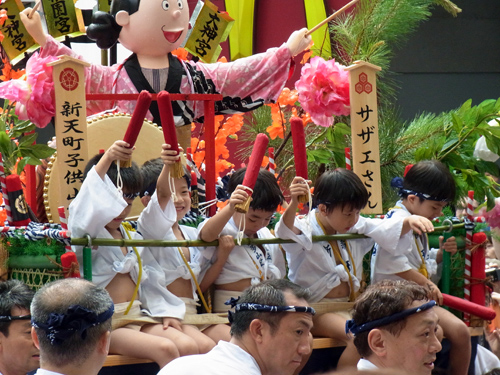 This event is supposed to give students, that do not live in Hakata the chance to see what partaking in the Yamakasa is like. The students get to look forward to running their Yamakasa for eight years, helping in the preparations every year before that.
The children participating in this childrens Yamakasa live in Daimyo-sho or Maizuru-sho, wich means aloth of children coming from a alrge area participate in this childrens Yamakasa.
The childrens Yamakasa are run first through Tenjin and then through the districts Daimyo-sho and Maizuru-sho on the 7th and 8th of July. 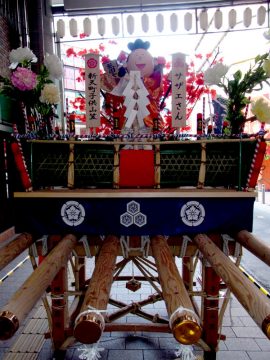 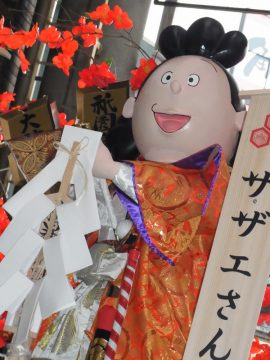 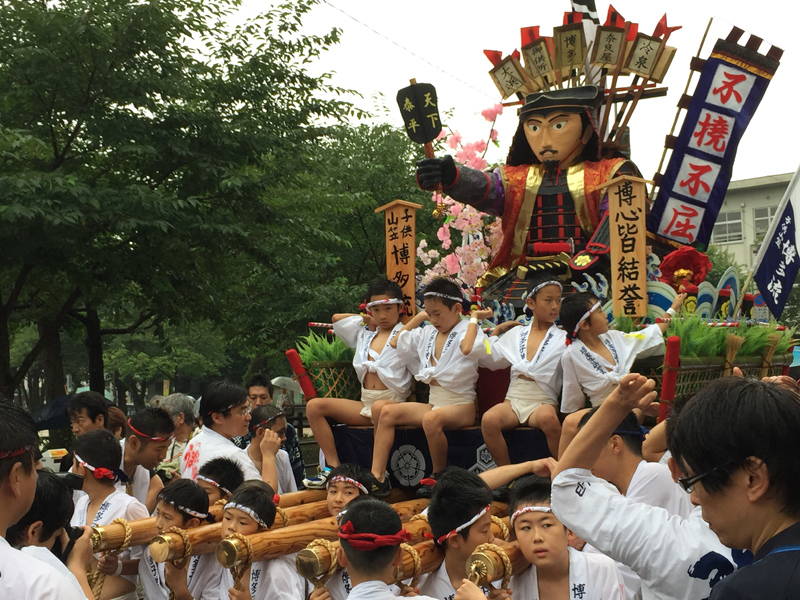 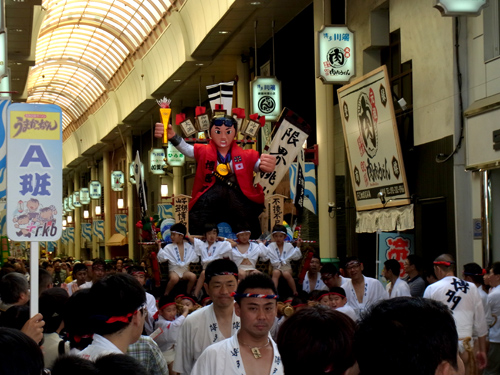 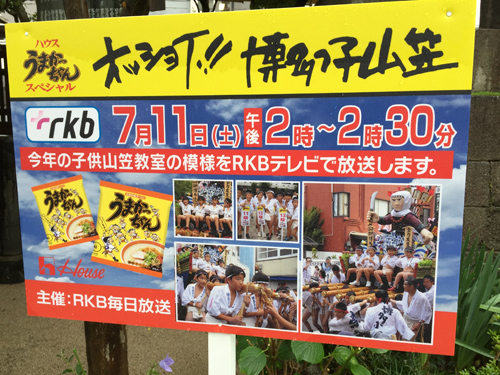 RKBs childrens Yamakasa was foundet in 1982 by the Hakata-Gion-Yamakasa Promotion Association and allows even children, that down even live near Fukuoka, to join a Yamakasa run. The community, that was until then impossible to join for people not living in Hakata, is now open at least for japanese children.
After the children made their own decorations in the RKB classroom, they get to enjoy the experience of carrying their own Yamakasa.
Because there are alot of participants every year, the participants have to register on the RKB Website in advance for one of the 300 free places along a Yamakasa.