The Oiyamanarashi (12th of July) 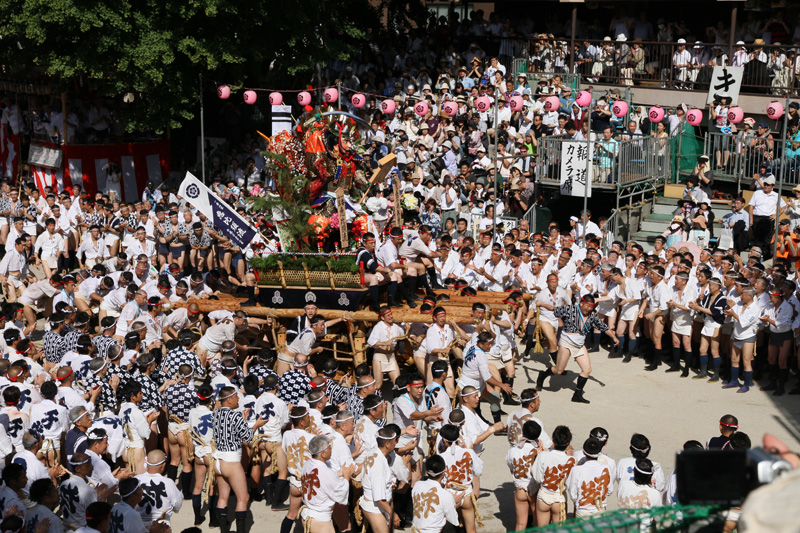 The dry run of the final event, done just like the real Oiyama, that concludes the 15 days of the festival.

This day is the day the Oiyama (追い山) is rehearsed, however the rehearsal is not to be taken as unimportant or uninteresting. The times and the course, with a few small exceptions, are the same as at the Oiyama. The participants take the rehearsal every bit at seriously and fight for every second, that they can be faster than the other districts.

For a larger version of the Oiyama & Oiyamanarashi map click [here].

There are many great spots to watch the race, decide on yours! 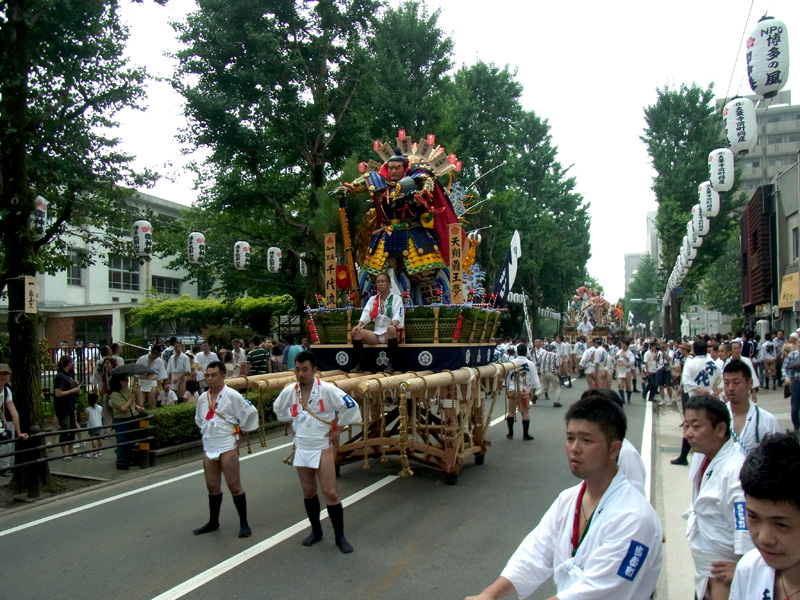 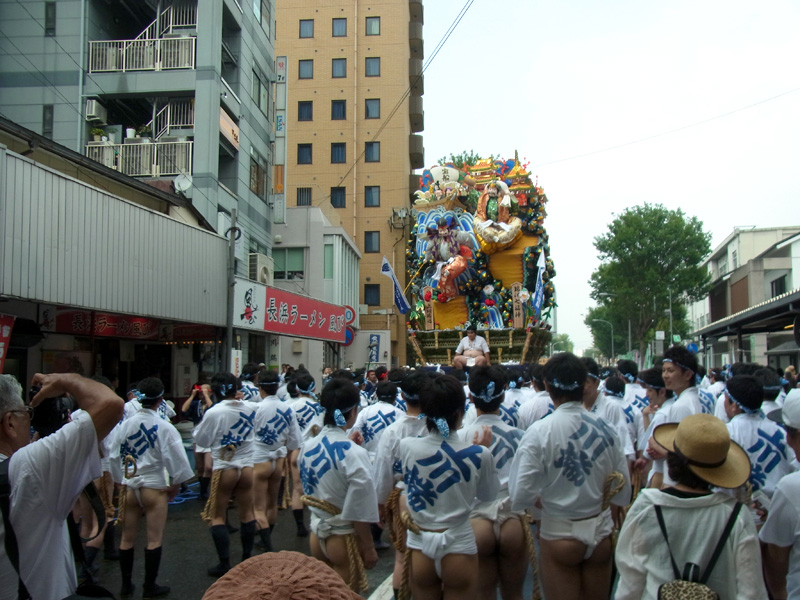 Seven districts bring their Kakakiyama and line them up with Kamikawabata-tooris Kazariyama behind them. The the men of the seven districts then gather at the Reisen-park ready to carry their Kakiyama along the path all the way to the Kushida-shrine for the presentation before the Kushida-shrine (kushida-iri). The tension before the start of the race seems almost graspable as they wait for the start signal. 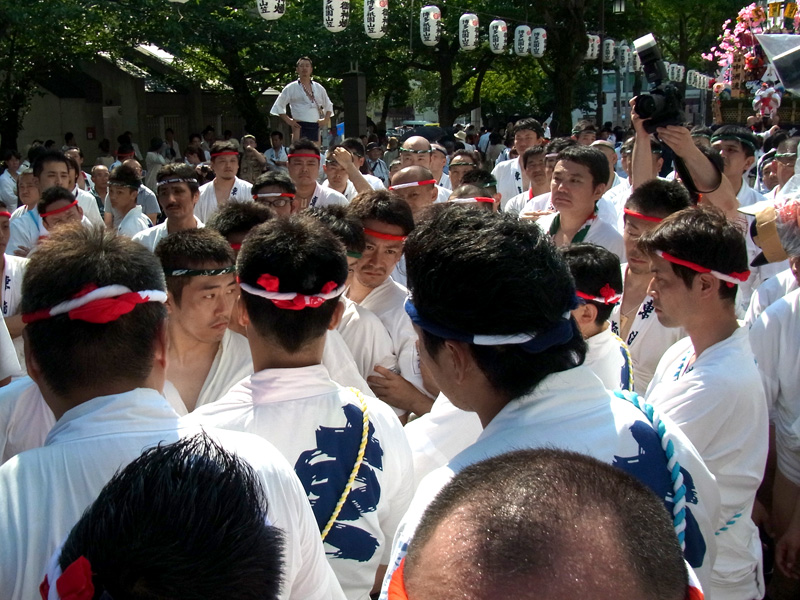 The selection of the men who will carry the Kakiyama, called Bōzeri (棒競り), is also worth seeing. It is usually carried out one hour before race and the men who want to carry the Kakiyama stand in a tight line before a judge and try to push themselves forward while making serious faces. The judge then picks out the carriers. To be picked as a carrier is an honour so a lot of young men will try to get in.

Because of all the men trying to be picked and the heat of the summer in Fukuoka the drink vending machines are often crowded or already empty, which is why we would recommend bringing your own drinks with you. 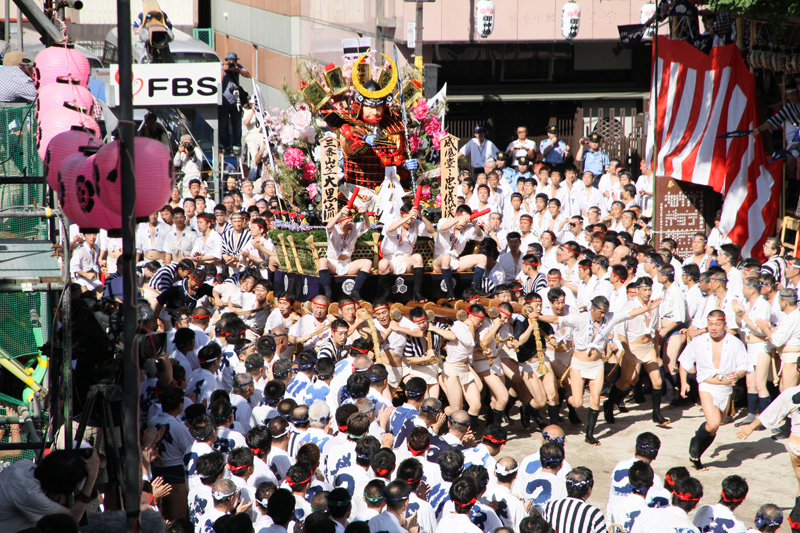 Regrettably watching the actual presentation of the Kakiyama is only possible with tickets (桟敷券) for the spectators loge, since the street in front of it is either full of traffic or too many people trying to view the spectacle. Getting these tickets is almost impossible since they sell out within 15 minutes after being available and sometimes are resold for tens of thousands of yen (hundreds of Dollars/ Euros).
However, the sounds of the ceremony is relayed by speakers and the atmosphere is enough to enjoy the occasion with the crowd. 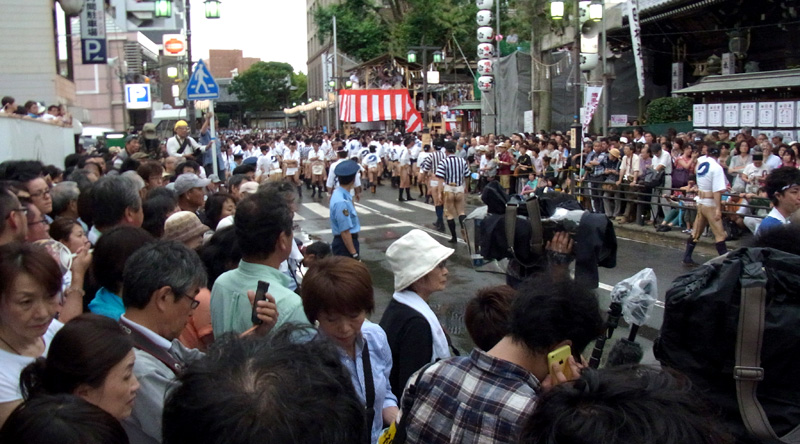 There are also a lot of interesting sights around the Kushida-shrine and once the crowd has dispersed after the festivities visiting the shrine itself and surrounding interesting spots is much easier. 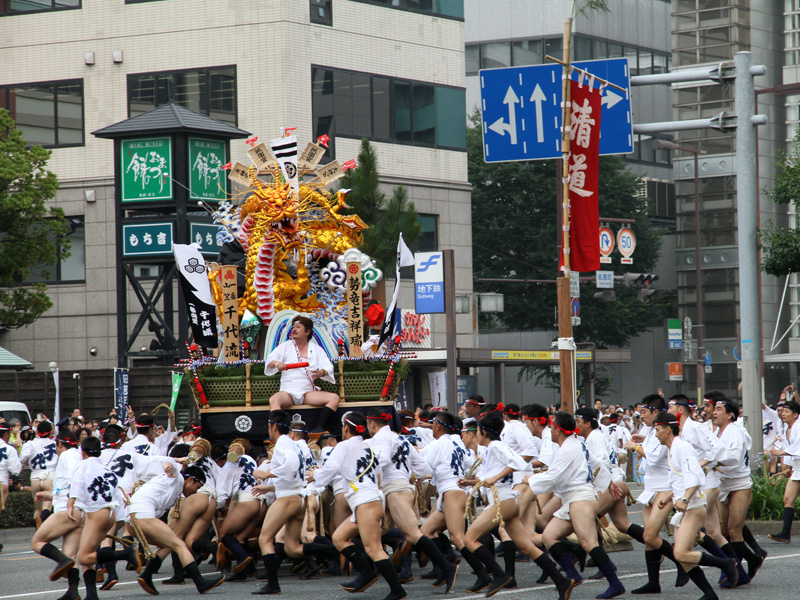 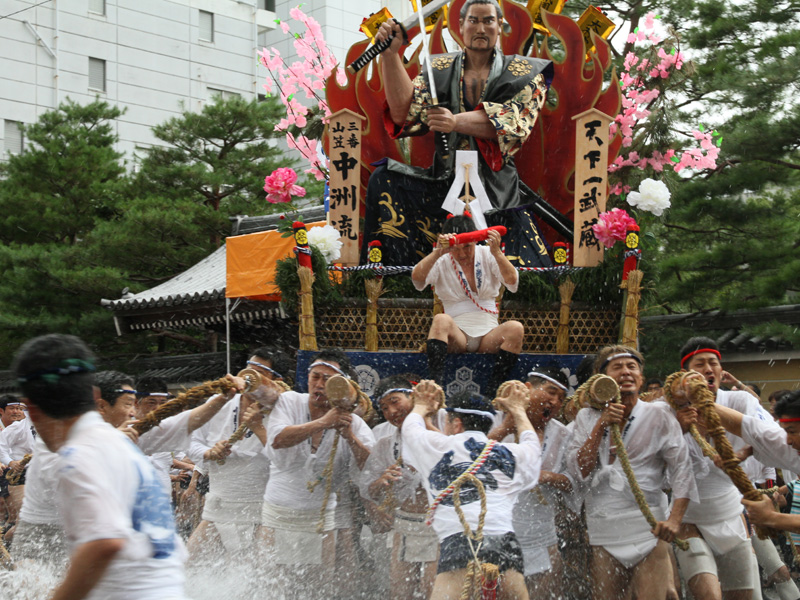 After having been brought to the Kushida-shrine the Kakiyama are carried down the Kokutai-road, around the Jōten-ji (承天寺) precincts and soon after that around the precincts of the Tōchō-ji (東長寺). The whole course is prepared for the occasion and even if you are not in Fukuoka for the Festival these three locations are definitely worth seeing. During this occasion the two temples Tōchō-ji and Jōten-ji are also possible locations for watching the Kakiyama-procession. However, due to the streets around the precincts being very small there is a risk of the Kakiyama carriers running into you. Please also be careful about the “vitality water” (勢い水) that is thrown on the carriers throughout the course. 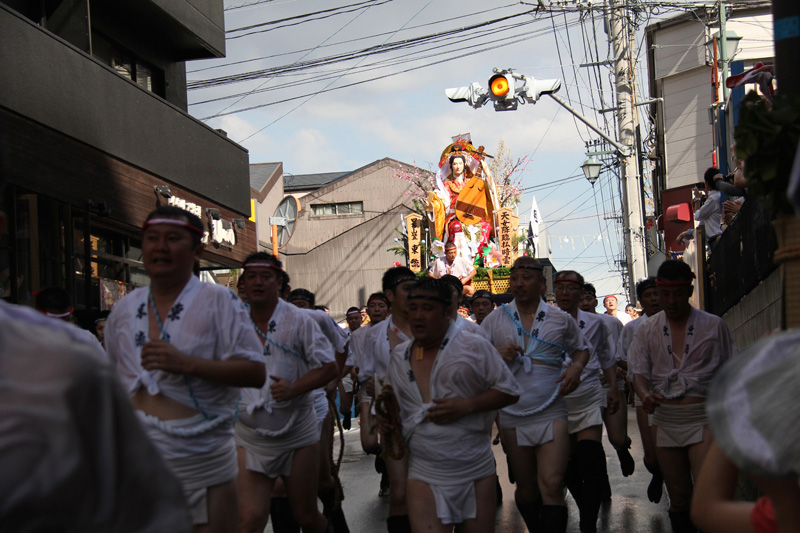 The Tōmachisuji-road is only about 4 to 5 meters wide and during the run of the Kakiyama a lot of people wait at the start of the road to ruin with the carriers. This road in Kamigofuku-machi (上呉服町) is rather short but goes downhill, allowing the carriers to run faster here, making it much more fun for anyone who joins them on this stretch of the way. Running at speed downhill with the sound of the carriers behind you and water being thrown at you from the sides can really make one feel like a carrier oneself.

From the main street into a small side alley. 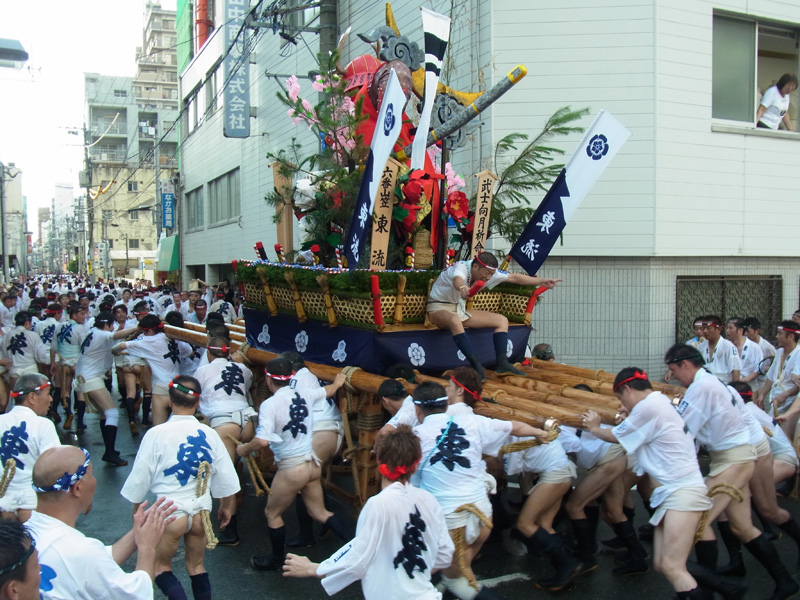 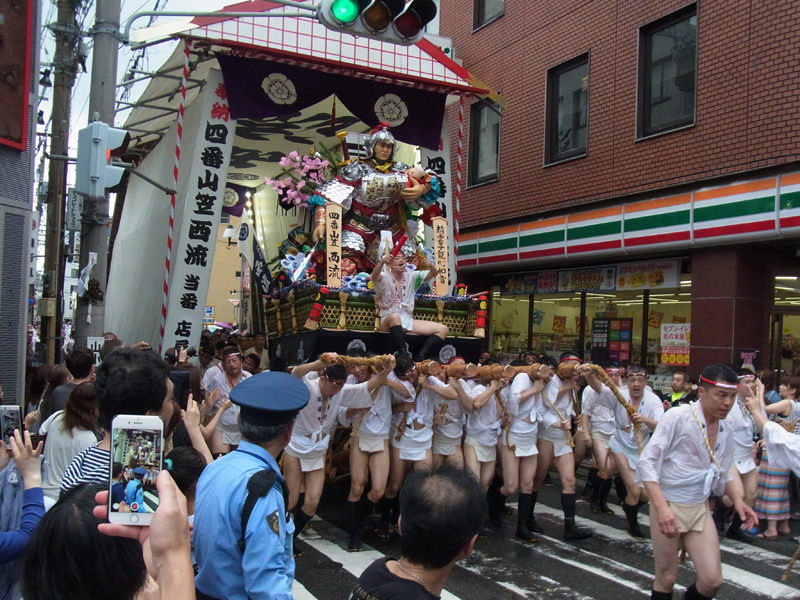 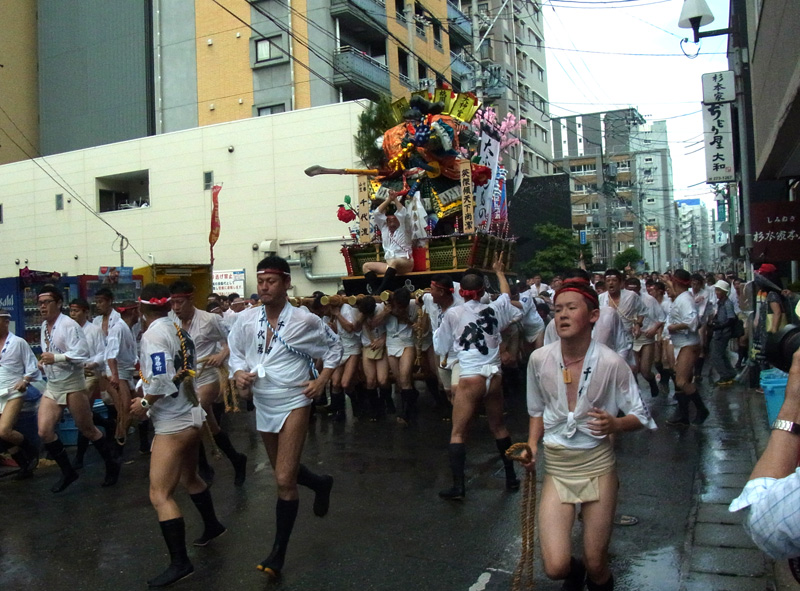 Taihaku-street (大博通り) is a great viewpoint for children and elderly people since it is very big with 5 car lanes and large sidewalks.

Because the road is very wide, the carriers use this opportunity to change places or swap with other carriers running along the side. All the carriers are out of breath and while they change places or readjust they can waver to the right and to the left for a bit. The runners will have to gather up as much stamina again as they can muster because now comes another hard part.

From here they turn into a side alley that is even narrower than the Tōmachisuji-road. This is the most difficult part of the Oiyama course and a lot of skill and technique is required of the carriers to somehow get their Kakiyama through the alley.

Please be careful in this street, since every year some accident happens here, mostly when the Kakiyama are at the corner of the alley. There are traffic supervisors, identifiable by green and white bands on their person (交通係). Here too there are large amounts of water being used to cool off the carriers.

Finally at the last section of the run! Only a short run ahead. 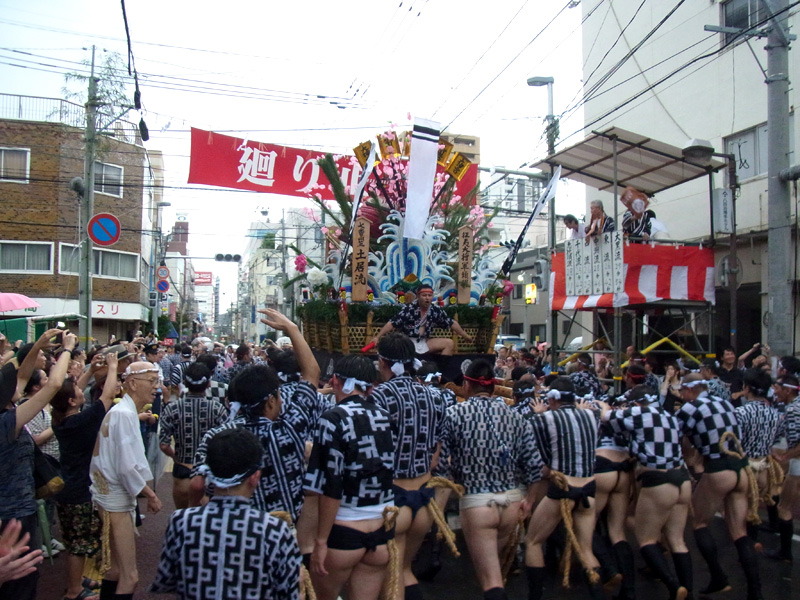 After coming out of the small alleyway the carriers summon the very last of their stamina for the final sprint to the finish line.

During the last stage the stouts of “Oisa” used to motivate the men grow ever louder and more frequent as the anticipation grows with them. Finally the finish line is reached and everyone cheers for the district that came in first.

During the Oiyama the finish line is around on Kilometer further back than on the Oiyamanarashi.

To the Shudanyamamise (13th of July) 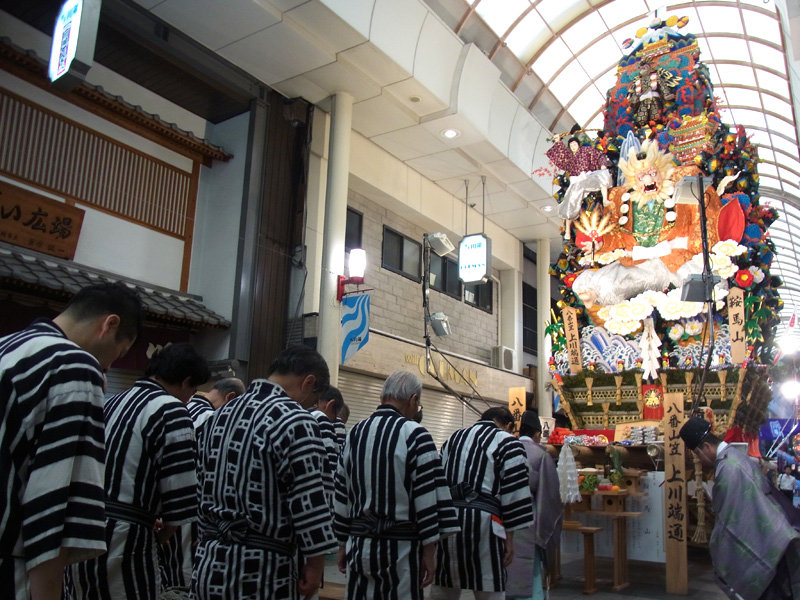 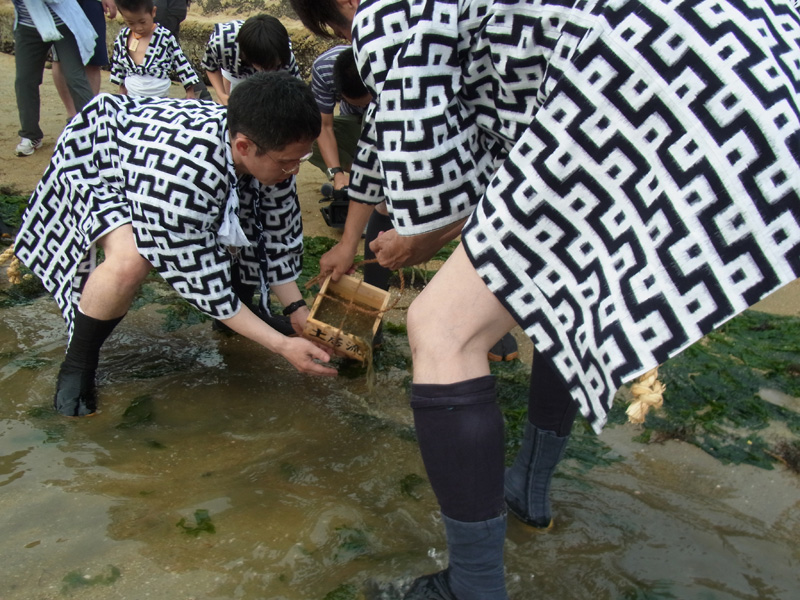 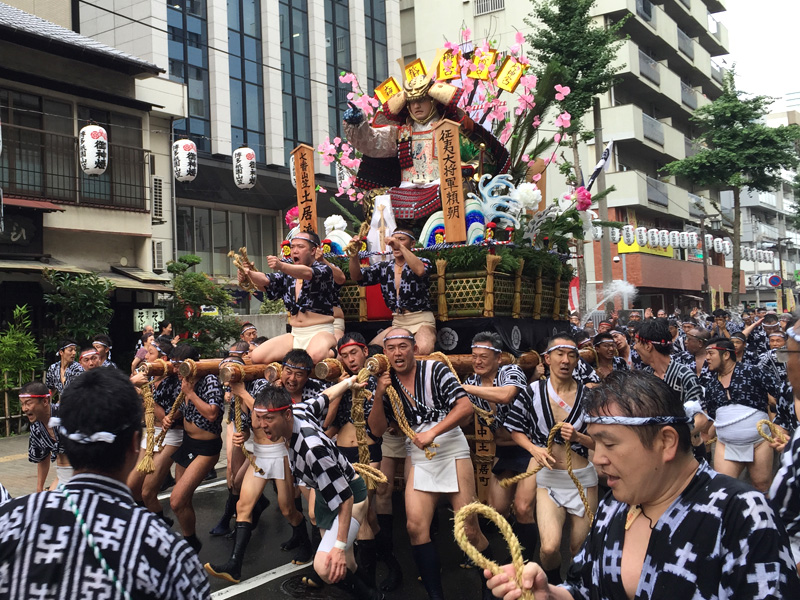 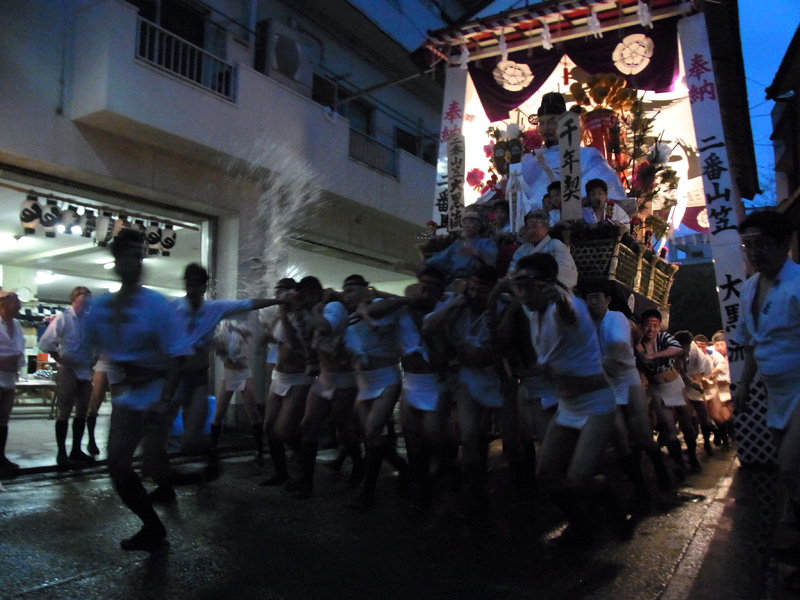 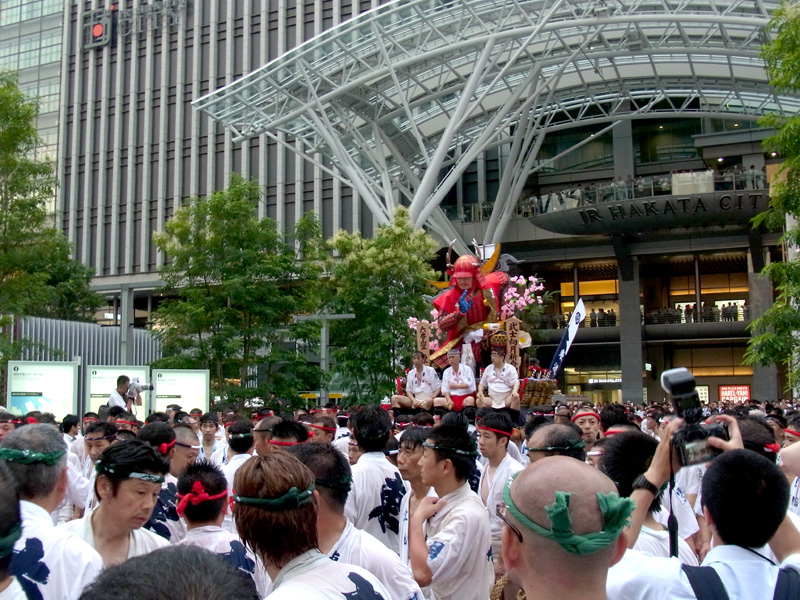 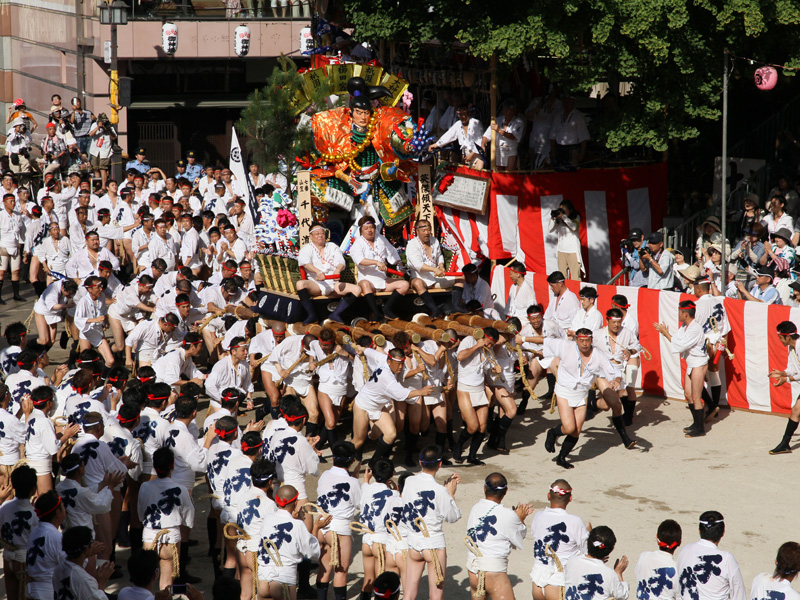 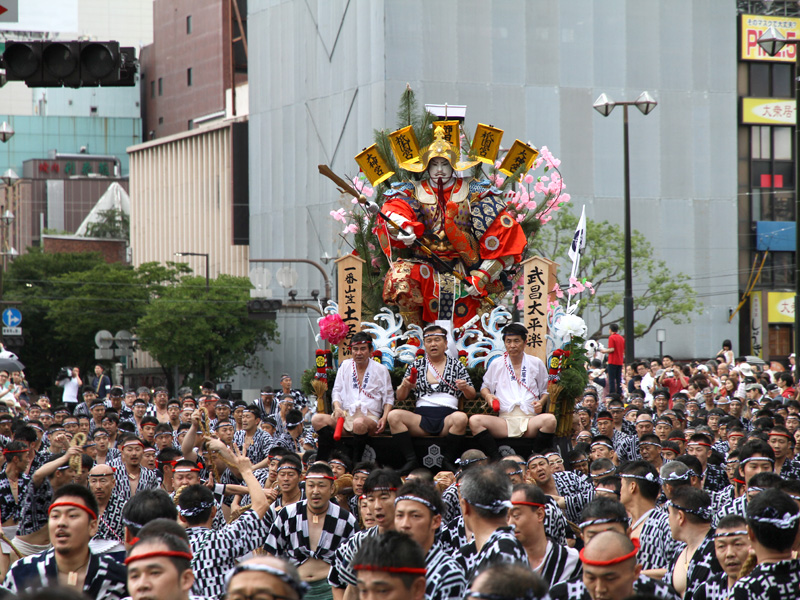 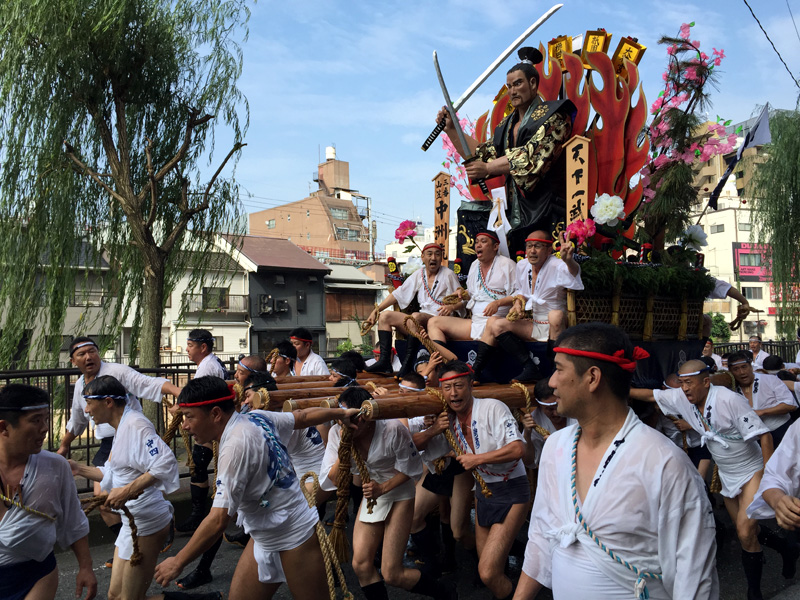 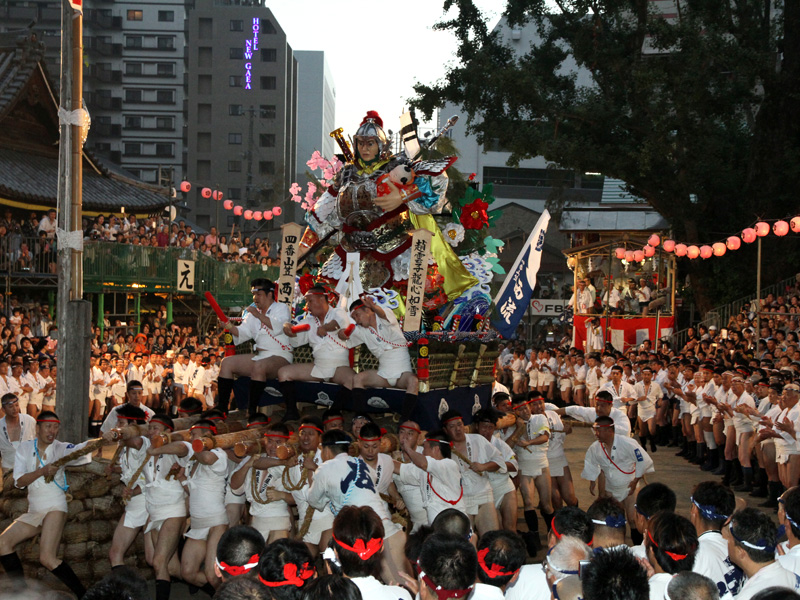