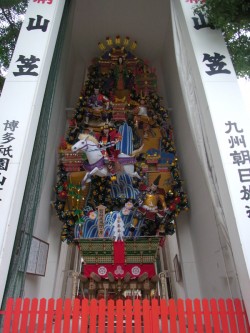 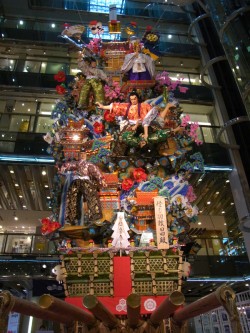 The Kazariyama:
The Kazariyama are the larger Yamakasa, that can easyly reach a hieght of over 10 metres. Kazariyama when literally translated means “decorative mountain”.
Some districts and other organisations of Hakata compete between each other who can make the most beautiful Kazariyama. There are 14 Kazariyama on display within Fukuoka during the time of the festival with one being at the Kushida-shrine all year round.

The decorations of the Kazariyama are decided upon by the puppetmakers and representatives of the district or organisation, that makes the Kazariyama.
The theme of the decorations is mostly historical and shows either scenes from the histroy of Hakata or mythological figures. The back side of The Kazariyama is then often decorated with cartoon like figures, showing todays life or even famous cartoon characters.
The Kazariyama of the Fukuoka dome is an exeption with the Fukuoka Hawks theme in front and the historical part on the back. 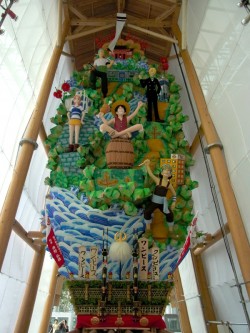 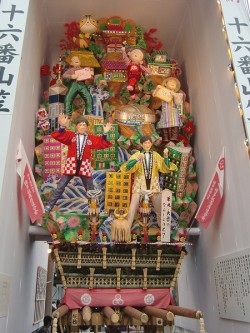 This trend of using non-traditional themes for the Kazariyama was started in 1954 when Shinten-chō put a Cinderella on their Kazariyama. At the time this caused alot of controversy, but over time using themes from western films and Japanese anime became more and more popular. Today it has been completely accepted and it has become a fun part of the festival recognising the decorations on the Kazariyama.

While usually the Kazriyama are destroyed on the 15th of July, the Kushida-shrine has built one Kazariyama, that is on display all year round for tourists. The Kazariyama of Kamikatabata-toori is also kept in the streets arcade and one has been stored in the Kyushu Historical Art Museum in Hakata.