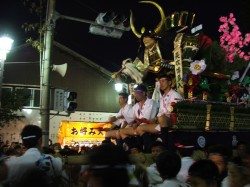 The Oiyama: The Oiyama is the final event of the Hakata-Gion-Yamakasa festival and the event with the most spectators. It is held in the morning of the 15th of July and is the last time that the Kakiyama are raced through Hakata.
For the site on the Oiyama click [here]

The racing aspect of the festival first came up in 1687. While the carriers of Doi-nagare were taking a break of carrying their Kakiyama, the carriers of Ishido-nagare (todays Ebisunagare) overtook them with their Kakiyama, which Doi-nagares carriers saw as dishonouring and raced after them. So the districs began to compete for speed and the run became a race with being overtaken still seen as a great dishonour.