The festival is now over 760 years old.
In its long history the festival has faced alot of problems and sometimes changed in order to go with the times or still be performable.

This was the year of the Yamakasas origin story, according to which Enni Ben’en saved Hakata of a plage by sprinkling holy water onto them from the top of a shelf used in the Segaki ritual.

Toyotomi Hideyoshi took over Hakata and pacified all of Kyushu in his conquest to unify Japan.
With the help of Kamiya Sōtan and Shimai Sōshitsu he rebuilt the devastated Hakata and split it into seven districts. 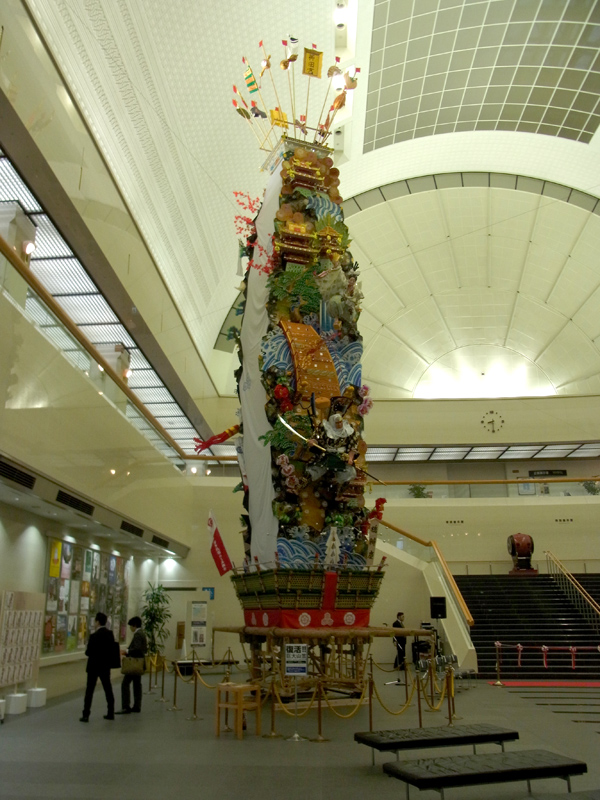 With the start of the Meiji-period the Festival was forbitten for a few years by the government in order to stop the old traditions and weeken the feudal system.
Just before the Meiji-perod the Kazariyama were built higher than before, reaching a hight of up to 16 metres.

This year the ban of the Yamakasa was briefly lifted, but only a few weeks before the actual festival, which is why the inhabitants only had time to make small mounds of pine branches with dolls in Yukata as decoration. Thus the separate event of Yukata-yama was created. The ban was reinstituted the next year.

After 11 years of being banned, the festival is allowed to be performed again.

The governor of Fukuoka tries to stop the festival.
Electrical power cable in Hakata had become widespread enough to be a serious problem for the festival. There were multiple instances of wires being cut before the festivities, in order to let the Yamakasa through.
The problem was solved by making one smaller Kakiyama to be carried around through the city and one larger Kazariyama to be richly decorated and act as a status symbol for the district.
The men participating were also from this year on forced to wear the water vest outfits, that they still wear today. Before they would carry the Kakiyama in nothing but loincloth and maybe sandals, which the Meiji-government, which wanted to conform to western culture as much as possible, would not tolerate.

Change of the date of the Oiyama. The Oiyama is the main event of the festival and was before 1910 carried out aroung mid June after the lunar calendar. After 1910 it was carried out on the 15th of July after the solar calendar.
(The Meiji-government had instituted the gregorian solar calendar in 1872.)

The festival was featured in the propanganda movie “Rikugun” (“the Army”).

In the Fukuoka air raid 902 people were killed and 204 went missing. Over 1200 households were affected and over 6000 people lost their homes or were injured.
Due to the large damage the festival was canceled.

The Yamakasa revival
The festival was performed for the first time sine the last three years but there were not enough people to carry it through the city, which is why only the presentation ceremony before the Kushida-shrine was performed.

The Hakata-Gion-Yamakasa Promotion Association was established and started including people from districts outside of Hakata and the seven main districts. 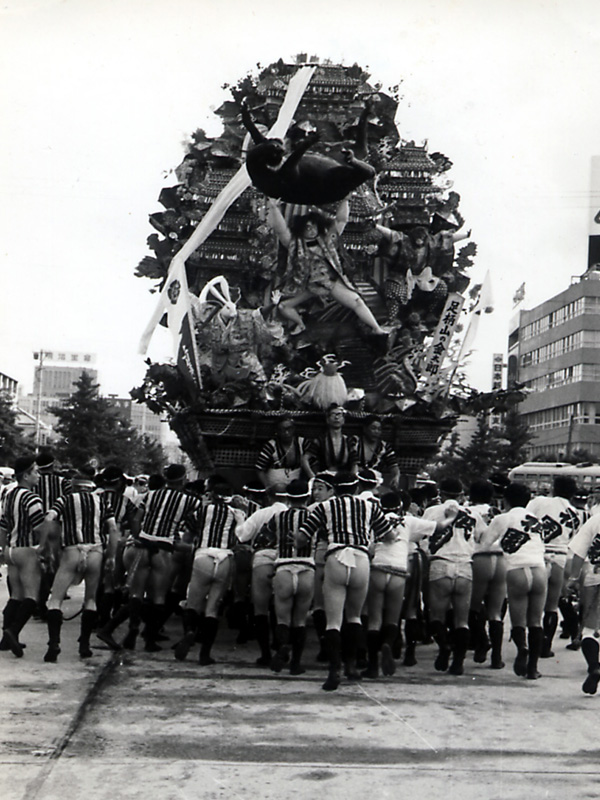 The first Shudanyamamise. The Kakiyama were for the first time carried out of Hakata to the central park of Fukuoka to show solidarity to the larger city, that Hakata was now a part of. Attracting tourists was also a reason for the added event, which is why it is the most pompous one with a parade of all Yamakasa going the 1500 metres to Fukuoka central park.

Kamikawabata-toori, small subdistrict, named after the road it is orientated along, began its “Kazariyama run”, there its men carry a Kazariyama along the larger roads with higher electricity cables in order to show what the festival was like before the Yamakasa were made smaller.

On the first of Febuary 1965 the city discontinued the old seven-district system and divided Hakata into smaller block like districts called Cho (“town”).
This however met strong disapproval within the populus because people had come to identify themselves strongly through their district and several district preservation societies emerged. The festival is still performed with the old districts and ignores the block units.

A small Childrens-Yamakasa is introduced, where elementary school children carry a smaller Kakiyama along a shorter path.

The festival is designated an important intangible folk property of Japan.

The festival goes abroad for the first time. The men of the Yamakasa participate in Hawaiis “Aloha Week Festival” and are seen as most impressive part of the parade.

Hakata begins making ist own decorative dolls, which before had been borrowed from Nishijin, Kyoto.